OK I’ve been kind of quiet…..some would consider absent, but we’ll stay off the details.  I realize I have not earned the right yet, particularly due to recent lack of material, to take a sabbatical, but that’s what I am going to do.  I have been feeling my own pressure to write for this blog and about a month and a half ago it was because I was experiencing what we writers lovingly refer to as “writer’s block”, or, more realistically, “what the fuck am I going to write about”?  I had some ideas, but having made the topics somewhat niche, I found I might have limited output that stayed true to the if not for Passion theme.  But blogs evolve.  I recently met with another writer, Sara Marks, who taught me several things in a relatively short period of time, and one of those things is about how her own blog had evolved–and so what if it had?  What if one day I have an epiphany about shoe dust that makes me want to write?  As long as the content is enticing, well written and engaging, who cares if it is not a subject about which most are passionate?  Although that could be a bad example because our population has a good share of obsessive-compulsives who would actually find any dust worth reading about.   But you understand.  And you may also grasp that this article is possibly an introduction to future material that may not be so deep or enchanting–but will hopefully still keep you happily reading.  After the sabbatical, that is.

As a few of you know, but a rather a sad portion more don’t, I have written a novel Artless, and it’s time to write my next book.  Whereas I don’t have enough time to promote Artless as I should (the full time “day gig” hampers everything quite efficiently), I’ll work on that a bit, but it’s really important to truly leave Garrett, Carmen, Sophia and Mack behind, the characters of Artless with whom I fell in love, and helped me write a very cool story.    I think I most closely associate with Mack since he is very similar to the man I shall be in a next life, though I think my hair will be a little darker.  Anyway, I’m ditchin’ them, or mostly, because I will now focus on Finn Darrs (Garrett’s brother) and write his story.  Which may or may not be a romance, but since he is a sloppy but exquisite chef with a penchant for poker and having dangerous fun, I think that piece will also have to happen.  Women are suckers for men like that, we really are.  I’ve known for a while I would spin off from Artless because it just needs to be done, but until just before New Year’s I couldn’t start the flippin’ thing.  There are novels written, or at least many weighty articles, on just how important the first line of a book is, on just how immensely  important the first paragraph is, and for good reason.  So how does this strike you?  “Finn walked to the post office all by himself.”….Kidding, Oh God that would be so bad, and not even so bad that it’s good.  No, I’m not going to contribute my first words about Finn Darrs here, was just having some fun.

My point is that I will be concentrating on him and where he goes, the adventures he manages, so on and so forth.  That, and I will be continuing a sci-fi/fantasy I started many years ago but lost.  My sister found said manuscript so I’ll take it back, polish up what’s there and then finish it, something  I am looking forward to.  Never actually thought I’d ever write a romance, actually.  I was always about sci-fi, mystery, and maybe horror if I could ever get something out there before it’s all been written.  But I guess all that takes is bringing back to life some of the horrors of childhood and the monsters we lived amongst–thankfully in our case, made up ones, and not the real shit some poor children have the misfortune of experiencing.  But right now that is where I am, and it’s an important path, a worthy path I believe.

I won’t miss an opportunity to write an entry if something wonderfully wicked or interesting forces me to write it down and share it, of course.  But if I am doing my job, hunkering down and writing away, I will be keeping myself out of the opium dens where the cool stories come more frequently, if you see  what I mean.  The sheltering life I will need for  a while cannot at the same time be a seeking life (other than mentally) if I am going to get things written.  I might occasionally write about the process if I think anything is relatable, but can’t see how it would be.  Problem is I miss the rambling, personal aspect of blog writing because I feel like I know everyone who is reading this material.  Not the same when you write a novel.  Clearly.  OK, I’m going to end this ramble before it get’s boring (too late you say? Oh you).

Don’t forget me too easily.  Feel free to write me an occasional note to see how it’s going.  Or if you want me to take a break and write about something that catches your fancy, lemme know!  In the meantime, have some fun yourself.  Knock the shit out of life as happily as you can and later we’ll chat.

As always, Be Thee Well. 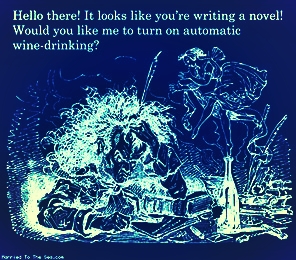 2 thoughts on “If Ever I Would Leave You”